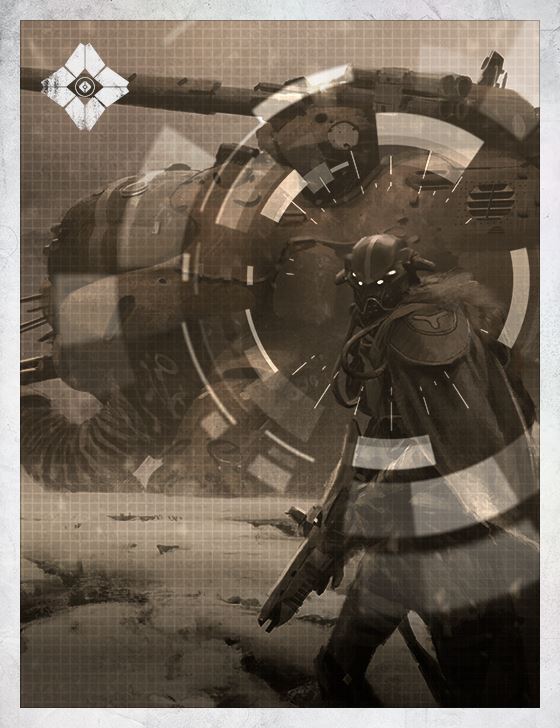 Cayde-6 Reminisces
Okay, okay, I'll tell the story about that one Fallen.

It didn't happen like that. We didn't, you know, do anything actively - no handshake, no icy stare of grudging mutual respect. I don't even know which hand you would shake. Do they shake hands? It must be complicated.

Anyway, it was like this. I was on the Moon. I cracked a Hive structure near Mare Imbrium, looking for a Shrine, and they just - swarmed. Ranks and ranks and ranks of Thrall, pouring out between the columns, but the columns were Knights, and all the shadows behind them rose up hissing sorcery.

Of course I ran.

I had a line of egress and while yes it was full of Thrall I had a backup too. I went upslope. Took cover in the shadow of a crashed Phaeton. Emptied my machine gun, ducked down to reload, and saw her at the other end of the hull, killing Thrall: a Fallen in Exile colors, bannered in the marks of a Baron, though the flags were claw-torn and stained with Hive ash. She was alone. I think she must have lost her crew.

For a while we just killed things which is hard to make interesting in a story so I'll pass it over.

At the end the Wizards came. I climbed the array to get an angle on them and she fell back to the base of the antennae where she broke her swords off in a Knight. I saw that happen and I don't know if I can tell you how I felt. She was another living thing with a mind I could understand and she hadn't howled at me or tried to eat my Ghost. I cheered when the Knight went down.

When I came down, empty on all guns, she was slumped against a bulkhead staring at me with all her tiny black eyes. Ether leaking out of her like smoke. The Knight hadn't died easily. Downslope the last Wizard moved like fire behind another line of Thrall.

I looked at her and wondered how many innocent human lives she'd ended on those broken blades.

She did the strangest thing then. Took the last shock pistol from her bandolier and threw it between us, as if to offer it. When I went to pick it up she tried to knife me, but she was slow, and when I broke her arms and opened her throat she didn't seem surprised.

To this day I wonder if she hated me, or wanted to make me kill her, or just felt she should spare me the choice.

I did kill a few Thrall with that pistol.