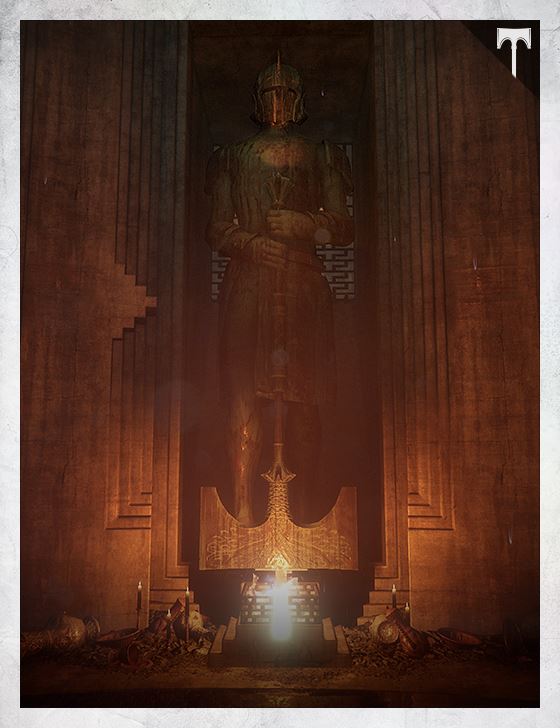 "This would be a lot easier if you all had run your names by me before you got 'em."

Skorri puts the pen in her teeth and crumples up a piece of paper. It joins dozens of others on the floor. Keeps muttering to herself.

"Felwinter. Radegast. Gheleon. Hell, even Efrideet, not that she's likely to get a verse now. Haven't seen her in weeks, anyway. Bunch of dactyls, all of you."

Perun strides in, a rifle under each arm. Notices Skorri and smirks. Skorri grins at her.

"Why couldn't the other Iron Lords have followed your lead, huh? 'Perun, in shadow clad, behind the shield / through cleansing fire our hiding foes revealed'."

Perun doesn't slow. "Did you just make that up right as I walked in here?"

"Of course I did! You're iambic! You give me something to work with! Mmm, we do work well together."

Perun laughs despite herself, shakes her head, leaves.

"Hardly my best effort, though. Plus, there's no room for Silimar in there, except for his shield."

She picks up the pen again, fiddles with it, stares up at the ceiling.

"Maybe something about that shield? Keeps everything out, keeps everyone out, protects himself so he can't get hurt? Hmm. Too on the nose? He does have a nice nose."

Two more Iron Lords walk through, all business. One rolls her eyes at Skorri, splayed on the couch. Skorri doesn't notice them enter or leave.

"Radegast goes in, I know that much. Known the old man too long to leave him out. Might even make it into the chorus. After Skorri, though. That goes without— hey, Gheleon, what's the rush?"

The Hunter stops, halfway out the door. Turns around slowly. Doesn't speak.

"I thought you were supposed to be the careful one. In such a hurry to get back out there?"

"A quick death is preferable to the alternative."

Gheleon sighs. "You're STILL working on the Iron Song? Why don't you just change the meter if it bothers you so much?"

"Change the— are you kidding me? Why don't YOU just change to using a... a whip?"

"You know, Skorri, some of us have real work to do."

Another Iron Lord. This one's young. Skorri doesn't recognize him.

"Have you forgotten about the ambush tomorrow? Or are you too busy writing limericks?"

Skorri's looking up at the ceiling. No response. The young one's mad now.

"A lot of people are relying on us, Skorri. If you don't think you're up for—"

"Hunters up top, 11 o'clock on the ridge. Two shots to the Servitor, draw their attention up. I come in with Radiance, Dregs are blinded, Jolder's powered up, she rushes in, splits 'em in half. You hopefully don't trip over your cloak like you did back at the Flood Zone, but I'm not optimistic. The rest come out of the cave, take out the Captain, Felwinter finishes off the south group with a Bomb, everything else is candy."

The young one still looks mad as he leaves.

"'The Dregs are blinded, Jolder's powered up / she rushes in and splits the group in half.' Huh. Needs work." Skorri picks up the pen again.

Shard of the Traveler (Stormcaller)