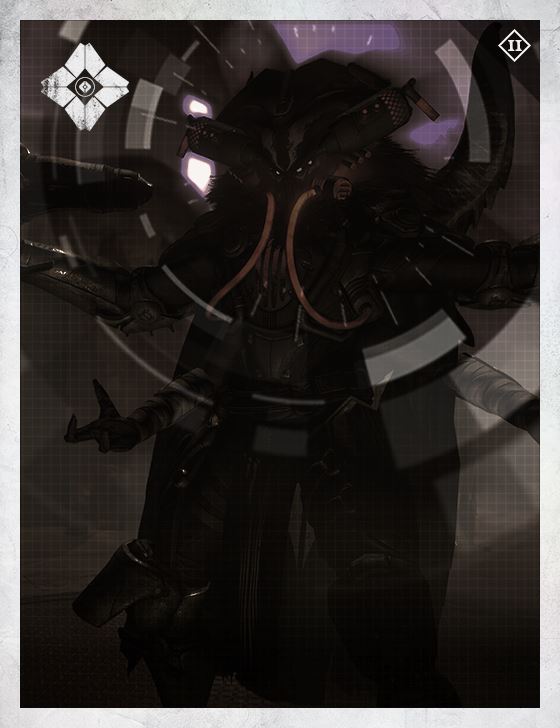 Categories
Added In
House of Wolves (2015.05.19)
Timeline
Skolas is given to the Nine #
The Nine release Skolas #
Skolas unites House Winter under his banner #

The cell cracks open. Skolas, Wolf Kell, stumbles out and crashes to his knees.

He tries to leap at the creature before him, the shape in the fog, to show it why it should be afraid. But the weight of grief smashes his legs against the cell. The rage upon him beats him to the floor. He falls on all four hands, his mighty armor thundering against itself.

His House of Wolves is enslaved! His people have been played! And it was his hubris, his would-be cunning that did it! While the other Houses fought for their future on Earth, throwing themselves at the Great Machine, Skolas wasted his people in games of betrayal and ambition. Bitter pride brought a bitter end!

If Skolas were a Kell he would ask his Archon to dock him. Ether hisses in his mask and it tastes cold, so cold.

He looks up. At the tiny hooded shape before him. The cell's mist is clearing. He can see.

"I believe that I am here," the creature says. To Skolas' ears it has a strange voice, a strange accent. It speaks his language. "I have a clear purpose. I cannot explain it. Forgive me."

From beneath its hood, tiny fingers of shadow probe the air.

Skolas rises up to smash it, to show his strength, because the alternative to violence is waiting for violence to come from a universe that has neither respect nor compassion. But he checks himself. His ambitions have brought him here, to this cell in this strange place... only it's not so strange, is it? It's the hold of a Ketch. "The Queen," he says to the thing. "You work for the Queen."

"The Nine made me aware of my purpose," the creature says. "If am here, then it is because the Queen sent you to the Nine, and they wish you sent back."

"I will do no one else's work." Skolas has been a pawn long enough. A Dreg told him, once, that she would play in a game as long as the game made sense. Nothing makes sense now except the thought of Variks' throat shattering in his fists. Variks! Variks the utterly disloyal, Variks who should be welded into a Ketch's prow atom by atom and left there as a figurehead to burn away.

"I am comfortable," the creature with the moving face says. "A part of me wants to go somewhere warm. Now I will certainly tell you what you have been given."

Skolas looks at the shrapnel gun in his hands. Skolas imagines what he would do with it if he could reach Variks, or the brother of the Queen, or the alien Queen. Will it save anything they've lost? The worlds docked from them? No. It cannot change the past. Only the future. Only the chance that his people might one day know themselves as more than pirates and scavengers.

"The ship will be yours," the creature says. It hunches over itself as if burdened by its own shape. "If you speak, you will be heard. I will go now. You are free."

He tries to follow it. He fails. Somehow it is gone. He goes up to the throne room, and sets his weapon down on the great seat. Skolas, Kell of Kells, goes to the ship's comm and looks for the sign of a Servitor, for the way to plot a course.