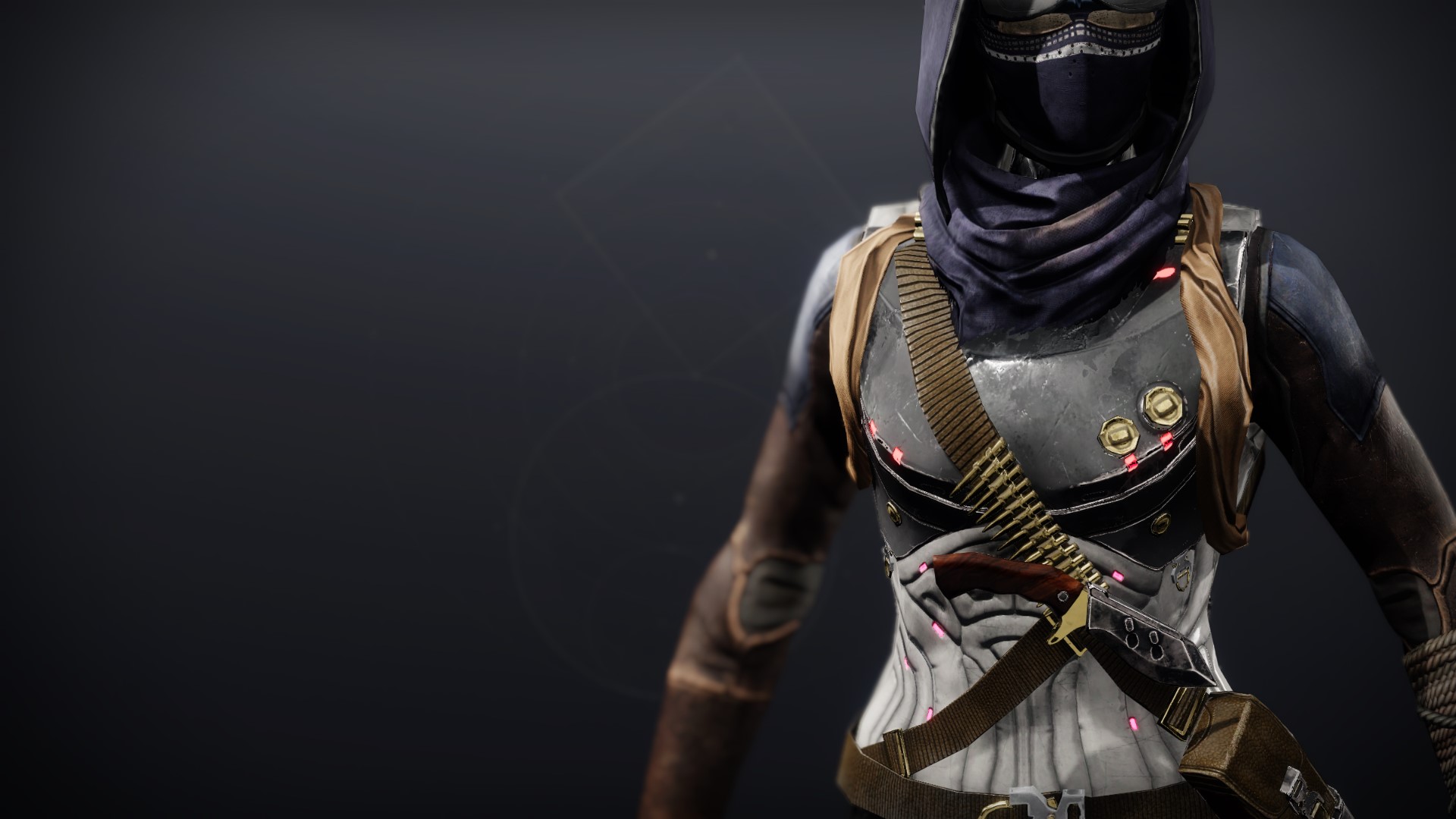 "We tracked the thing all the way to the ruins of Old Chicago, down into the tombs. We weren't hunting it. It was luring us." —Aisha, Human Hunter

Dust whipped across the Tangled Shore as nebulous clouds rolled and torrented overhead. It wasn't clear to Gaelin-4 where exactly wind was generated in the Reef, but it howled just the same. The three huntsmen lay on tattered mats in the dirt, backs to each other and the sky, in a triad. From two of their backs: matte black quills bent in the wind. The third's back was shrouded under a faded tan cloak, tent-poled by the quiver extending from his Orpheus Rig hip plate. Their vehicles: lashed down under camouflaged covers.

Shimmering flames licked the interior of the burnt-out transport. The engine oil they used for fuel turned the blaze a violet hue.

"I'll draw it to the Void tether. Once it's snared, we can spring your Arc-cage."

"The Guardian does not want Web Mines? Highly effective." Vynriis gestured to her covered Pike.

"I don't need anything exploding while I'm securing the cage."

"If the Guardian says so," Nivviks replied, checking the bolt on his Wire Rifle.

"Just don't shoot me in the back."

"If the Guardian says so…"

Hours of night drift by slowly. The violet fire began to burn down.

"Does the Guardian enjoy Spider's employment?"

"I'm a freelancer. Payment is my employer, not Spider."

"And Spider supports that sort of entrepreneurial spirit?" Gaelin-4 asked.

"Payment flows upward, and the Spider looks elsewhere. All is made well," Nivviks said.

"Do you know who that man back there was, in your Spider's lair?"

"Do not care." Nivviks added.

"Osiris. You should know. Ever heard of Six Fronts?"

"Many times, from Guardians who speak of little else than their victories." Nivviks adjusted his posture.

"I think I can speak to it. I was there," said Gaelin.

"I was not," interjected Vynriis. "Vynriis knows only the Shore."

"Do they tell you all Fallen died that day? No Guardians? Convenient," Nivviks cackled.

Gaelin-4 rolled to his side to look at Nivviks. "You saying otherwise?"

Vynriis listened to the two without moving.

"You're older than I thought. I'm sure you'd agree things were simpler then. You knew who was good, and who was bad. I miss those times. Now… it's a mess."

"Simple?" Nivviks laughed in Gaelin's face. "Life was never simple, but suffering makes the mind narrow. Changes what we see. Survival makes many enemies. We know this truth."

"Alive for so long. You killed your fair share of our people," Gaelin said bluntly.

"And you, ours," Nivviks replied. "Now we are not killing. Is this not simple?"

Gaelin thought for a moment. "Past can be hard to forget."

"Yes, but Guardians have the gift of time," Vynriis said quietly.

"Your heroes, our nightmares," Nivviks said. "Osiris. We had a different name. He is… not so intimidating now."

"I wouldn't say that to his face. You should be thanking him." Gaelin-4 rolled back to his original position.

"I guess. Without Osiris, we could be on a completely different timeline… or worse."

"Yes… this one is preferable. Many prosper. No problems here."

"If the Guardian says so."