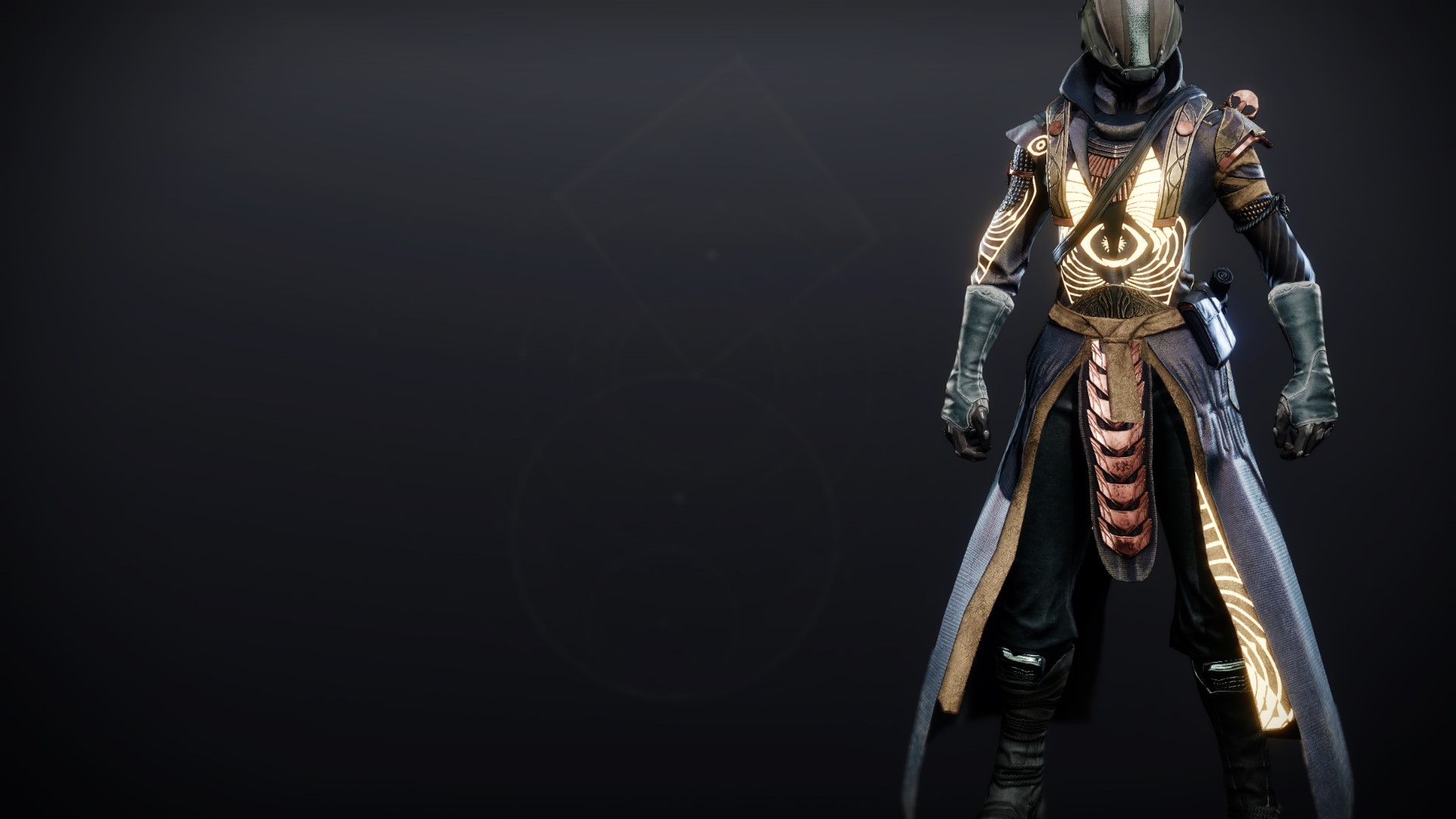 "I hold faith in the Light, unwavering."—Shayura, Awoken Warlock

Titan's sea of liquid methane crashes against the listing hull of the New Pacific Arcology. The wind whips with hurricane force, sending a freezing sea spray lashing across the crooked metal frame of a crumbling catwalk. Flares of atomic fire bloom in the mist and roll off the arcology's walls. Human and inhuman screams echo out into impossible seas.

Two dozen Hive Thrall come pouring out of an encrusted airlock, climbing over one another, jaws snapping. They scurry across every surface not slicked by liquid methane; drawn like moths to a beacon of golden flame. Shayura stands against the crashing tide of chitin and bone, a Sword of fire held fast in two hands, screaming as she cleaves through the masses of encroaching death.

Burning embers of Thrall rain around her, but with each dispatched wave of necrotic soldiers, it feels as though their numbers double. She is pressed by the tide of Hive, inching closer and closer to the jagged end of the catwalk hanging over the churning sea. When the Thrall recede, she is thankful for a respite. But the towering Knight that drops from the airlock is an escalation, not a victory.

Edging a half-step backward, Shayura knows that the only way out is through. Wings of flame roar off of her back, leaving a trail of rippling heat and hollowed-out Thrall in her wake. Her Sword clashes with the Knight's shield, shattering it in a single blow. Her follow-through cleaves through the Knight's arm, down into its chest.

Shayura turns on her heel toward the remaining Thrall. She can feel the Light in her ebbing and knows that they will overwhelm her if she doesn't succeed now. Death against the Hive is never a sure return; not after what happened to Taeko-3 and her fireteam here. A blinding pain hits Shayura in her back. Her vision swims, mind reels; had she missed one? Feeling the warmth of blood running below her armor, Shayura turns to see the Hive Knight reborn, Sword covered in her blood.

Screaming inside her helmet, Shayura feels a deep panic build in her chest. She knows a Hive death ritual when she sees it, and she walked straight into their trap. She rolls away from the Knight's next swing and into the reach of Thrall that tear at her armor. Mustering the last of her Solar energy, Shayura calls up a cyclonic pillar of flame that twists up into the sky and consumes the Knight.

The revenant Knight emerges from the flames, already reconstituting. Shayura leaps forward and drives her Sword through his face, tackling him to the ground. Her Solar aura flickers and fades; smoke and steam billow from her back and shoulders.

She hears one of the surviving Thrall speak in a human voice. Shayura twists her Sword in the Knight's face and shakes sizzling green blood onto the catwalk. The Knight begins to reform again in a horrifying blaze of green flame, but as it reaches out toward her, she cuts off his arm and sends her Sword through the top of his head in a brutal follow-through.

The Thrall wails. She can feel an arm around her waist, restraining her. She kicks and struggles, crying out as the last wisps of Praxic fire twist down her arm and Sword.

"No! No! Stop! No!" Shayura howls, fighting against the pull of the Thrall.

"Shay," the Thrall cry in the voices of her friends. "Shay!"

Shayura screams into the impossible seas.