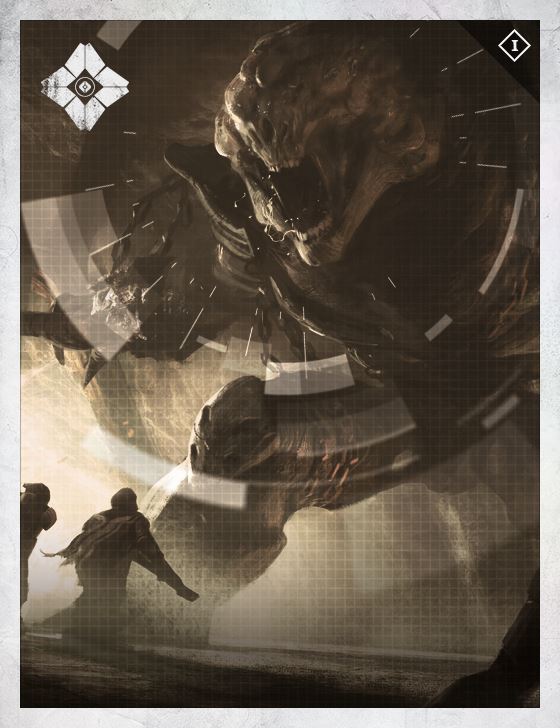 "The nightmares will crawl across this world and the machines of old will rest silent as they witness the final Light of this seemingly eternal dusk."
Ikora: And this Omnigul is here? On Earth?

Eris: I can feel it.

Eris: She’s left the Hellmouth. Her inner chambers are active. More so than I have seen. But she is no longer in the shadows.

Ikora: No, not—I don't question your belief. I’m asking why she is here. Why Earth? Please, try to be clear. There is no time for cryptic half-answers and almost-truths.

Eris: It seems I have become more like the Speaker—

Ikora: Secrets have their places. Here, now, is not that place. Omnigul. Tell me what you’ve learned. Tell me how we stop her.

Eris: There may be no stopping what comes. The Hive in Old Russia—in that dead land—their assault on the Cosmodrome is no coincidence. They move against the Light with purpose. Always with purpose.

Eris: Rasputin. Yes. The last fail safe against the night.

Ikora: He’s still yet to heed our calls—

Eris: Just is enough. Just can save us all.

Ikora: And the Hive?

Eris: They will tear into its eyes—or worse.

Eris: The dust and bone and horror of their existence is simply who—what they are. But it does not negate their ageless intelligence.

Ikora: They do not seek to destroy Rasputin.

Eris: I don’t know. Destroying Rasputin would cost us a treasure beyond belief. But, such fury twisted to the Hive’s ends?

Ikora: We would fall.

Eris: All would fall.

Ikora: The Omnigul is here for Rasputin.

Eris: She is here to pave the way.

Eris: That could just be the beginning. He's not their only god.

Ikora: As I am learning. I will make the others listen.

Eris: It may be too late.

Ikora: Then you need a new army.

Eris: I’ve made that mistake before.

Ikora: You saved us all. Your sacrifice—

Eris: I am still here. My sacrifice was—

Eris: And I should ask new heroes to fall... as they did?

Ikora: It is why we were reborn in the Light.

Eris: My Light is all but gone.

Ikora: Cherish what remains, but know that you have done enough. Your time in the shadows... I can't fathom—

Eris: My role among the Hidden is an honor.

Ikora: None would argue. But it's had its cost. Your place is to gather the understanding we need to wage these wars, but your own war is long done. Let those prepared to fight, fight.

Eris: And should they die?

Ikora: None who walk these Towers is afraid—and Rasputin must not fall.

Eris: Then Omnigul must be stopped.

Ikora: Two goals that appear to be one and the same.

Eris: Perhaps. So I am to stay?

Ikora: I will see to it.

Eris: Then let us hope we are strong enough to stand against what is upon us—and hope the others do not follow.