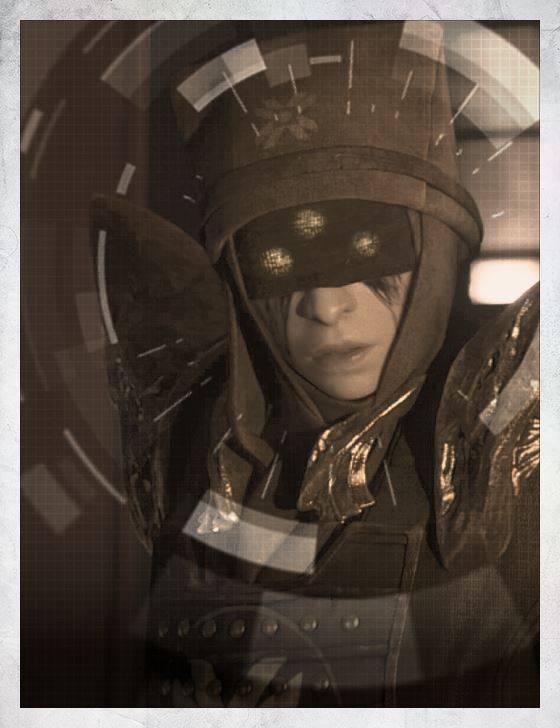 The Tower’s med bay was still. Guardians might operate across the system at all hours but even in the heart of the Last City, there is sometimes... quiet.

The Awoken man lay upon the bed like a broken thing. Machines monitored his every twitch, every aspect of his physical status. The steady, quiet blip of his heartbeat was the dominant sound in the room.

A small transplex window sat in one wall of the room. Hovering there, eerily still, was a Ghost. Its single eye reflected against the inside of the window, a steady red glow.

In the corner of the room sat a chair. Cheap, vinyl-covered, this chair could have been a relic from the Golden Age itself. And, suddenly, it creaked.

Because, in the stillness, there was another measured source of breathing in the room.

Eris Morn settled back into the chair, allowing the dark wisps of power she’d summoned to effortlessly flow from her back into the night. The green emanations from her shroud were stark against the dimness.

Almost as an afterthought, the Ghost turned from regarding the window. For a moment, three eyes stared at one, before it turned back to its watch.

Her face implacable, Eris regarded the Awoken in the bed.

His name was Asher Mir.

Irascible. Annoying. Cantankerous. She’d even seen Ikora Rey become... exasperated in his presence. Her lips quirked, very slightly, upwards. A kindred spirit, if she’d ever had one.

Her smile died as her gaze slid to his side. His Warlock garb had been stripped from his body, and she could see his pale blue chest as it rose and fell in the bed. His arm. His arm was gone.

In its place was a thing. The point where mechanicals knit with flesh was ghastly to behold, but the design was unmistakable to any Guardian who’d been in the field: Asher Mir’s arm was that of a Vex construct.

Her eyes flicked to the ghost at the window. It too, was transformed. The unmistakable outline of Vex technology encrusting and penetrating the small warden’s shell. That red, staring eye...

She stood, and stepped to the side of the bed.

Her voice was gentle, quiet, but its timbre filled the still air of the room.

“I am leaving, my old friend.”

The man in the bed did not stir.

“Soon I will take my leave of this”—she put her hands up, to take in the med bay, the City, the Tower, Earth—“lie.”

She placed a gloved hand on the back of his blue, flesh-and-bone hand. “I wish we could have spoken, you and I, one last time. But my story here is done. I have avenged those I lost. I must find...”

She stopped, and beneath the gauze on her face all three eyes closed. For a moment she allowed herself to feel the dark tears that flowed, unending, down her face. The eyes reopened, and her strength blazed in the darkness.

“I must find a new path through the night. The Hive are vast, and ancient. A power from far beyond our realm. If we are ever truly to face them, ever truly to put an end to their hate, I must step beyond the safety of the City.”

She lifted her head and looked beyond the window to the horizon. To the grand sweep of the Walls, the edge of humanity’s reach.

“Be safe, Gensym Scribe. A storm is coming. And I will not be at your side when it finds its way to our shores.”

With those words, and a gathered locus of power, she was gone.

The room returned to stillness. The blip of the Awoken man’s heart echoed from the machines. And the Ghost stared into the night, its red eye never blinking.

Festival of the Lost: Underwatch