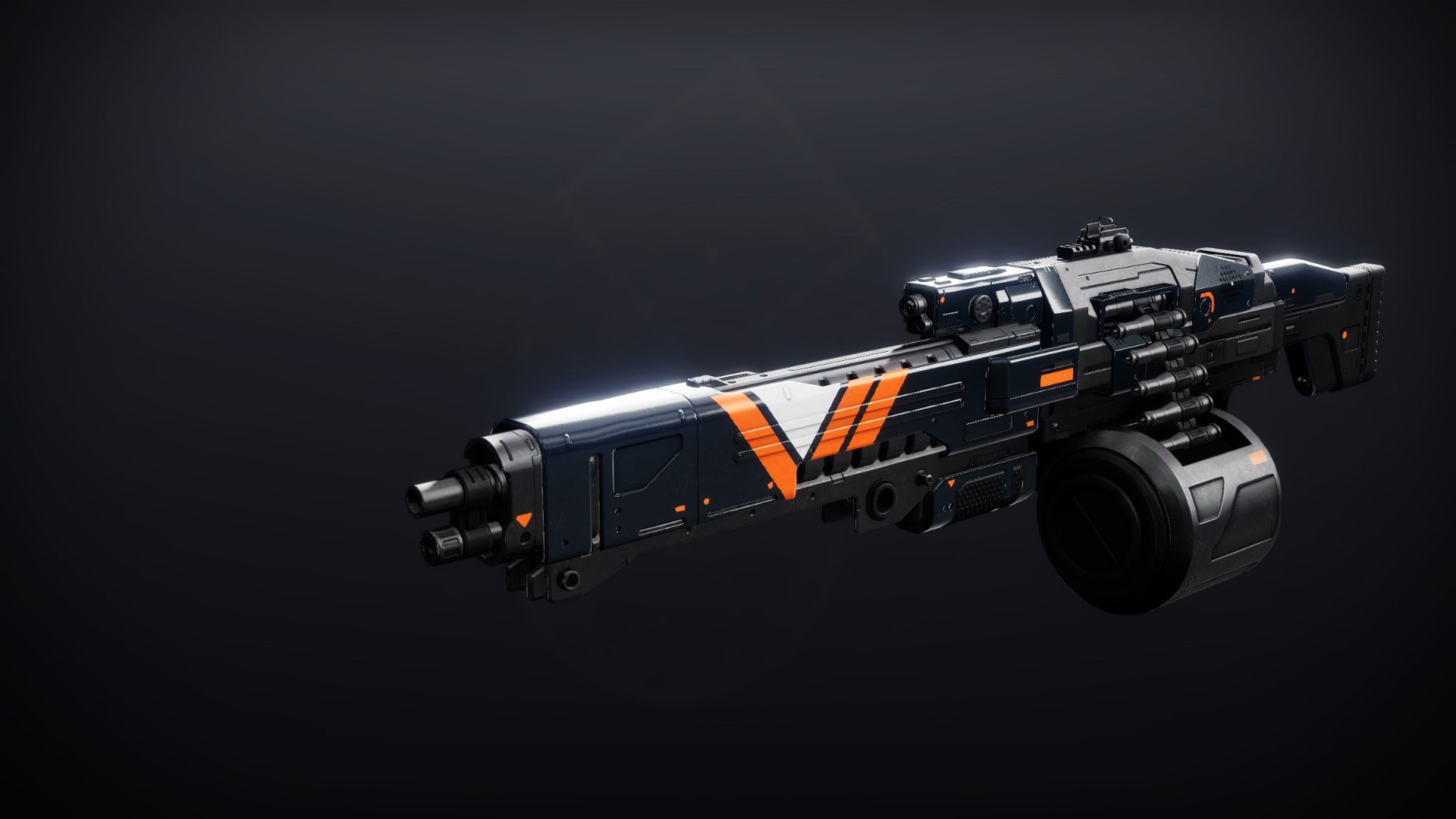 Hunger is the all of it, and it is all of hunger.

The Cosmodrome quakes under a killing wind: fire sent roaring from entrenched Cabal gunlines across the Mothyards. A Cabal advance threatens to encircle a defensive line held by crimson frames and one lone Light.

Shaw Han dips his head beneath a swivel of Machine Gun rounds and dives for the trench line. He slams his back against an earthen wall next to a few shot-to-pieces Redjacks. His eyes focus on the gaping bullet holes perforating their thin plating as he runs a shaky hand over his own chest. At least they were just frames. He had bled out from open wounds before and was in no rush to relive the experience. Shaw peers down to the end of his trench where a detachment of Gladiators crash through their flanks. "Just a little farther…"

A Solar explosion vaporizes the leading Gladiator and scatters their charge. A surviving Cabal recoils from the explosion in confusion. He stumbles backward into another of Shaw's trip mines and obliterates the rest of his comrades in a chain of explosions. Shaw exhales the tension in his chest and makes a mental note of the frames lost in the blast. He could take a verbal lashing from Shaxx if it meant no more blood on his hands.

He glances back to the flank. Through the settling dust of a crisis averted, Shaw sees faint silhouettes of a second Cabal charge incoming.

"Damn it!" Commander Zavala had tasked him with holding this sector. Had called him by name directly, imbued Shaw with his trust. He couldn't go back having lost a fertile ground for new Lights. Old Russia was his to protect, and no Cabal conqueror would claim it while he still drew breath.

Slugs slap hard into the earthen trench wall at his back, sending reverberations through his ribs. He shifts to plot a safe path to defend the flank. Shaw readies to move as a heavy metal boot slams out of transmat in front of him, followed by a solid Light barricade erected to deflect the incoming metallurgic hail.

"Get up, Han. That ditch isn't going to save you." Machine Gun fire thunders off the barricade as Lord Saladin grabs him and raises Shaw to his feet. "That's for your Light to do."

"Zavala forwarded your support request." Saladin ignores Shaw's surprised expression and eyes the Cabal fortifications. "You're with me now."

"Sir." Shaw nods with a steady confidence. "What's the plan?"

Saladin peers through the cracking barricade, slugs crashing finger-lengths from his face. "Holliday is en route to deploy our heavy ordnance, but she needs their attention off the skies." Saladin looks at him for the first time and smiles. "Take out their flak guns, and give them no choice but to focus those Machine Gun nests on us."

"Oh…" Shaw wasn't sure if he'd call this a plan—maybe a Titan plan.

"You're fast on your feet, son. You'll be fine." Saladin motions the advance; "JACKS, SUPPRESSING FIRE!"

Lord Saladin strides into the no-man's-land surrounded by advancing Redjacks and a billowing aura of searing refraction. He hurls a fusion grenade across the expanse without breaking pace and demolishes one of the dozens of machinegun nests outright. Shaw moves behind him. Flame licks down the Ahamkara spine lashed to his arm until it meets the hammer of his weapon and ignites his Golden Gun. He singles out several enemy flak cannons and skewers them with Solar points, incinerating nearby Cabal.

Hot barrels realign on the Guardians as a magnificent flare emblazons Lord Saladin's armor in Solar Light. From his palms erupts a mighty maul that clinks into his gauntlets. Heavy slugs clang as they shrug off his immolated plate. He does not flinch or falter. Saladin charges the line, heat intensifying and melting slugs into slag droplets that ping and sizzle against him. He slams his maul into the dirt, driving a sweeping inferno toward the Cabal gunline. It hits like a bursting artillery shell, catching oil alight and spreading hot panic through the Cabal ranks.

Shaw dodges around incoming fire and reloads his weapon. He snaps off two more golden rays into the remaining enemy flak cannons. Frames push forward alongside them, absorbing slugs for the Guardians and keeping pressure on the gunline. Shaw spots several Gladiator detachments redirecting to confront them. He pushes the bulk of his Light into his weapon, spreads its influence to reach the nearby Redjacks, and reignites his gun before touching the barrel to the ground and firing. The ground bubbles with hot magmatic Light; a warmth envelops the Redjacks as Solar flame imbues and empowers their rifles with golden power. Shaw directs the firestorm of golden Redjack rifles to incinerate every last charging foe.

Saladin bears down on the Cabal, almost in their ranks now. He is a wildfire of Light and death. Legionaries flee their nests rather than challenge him. Frantic Cabal radio transmissions crackle across the battleground. All remaining guns turn to stop the Iron Lord's advance, but only succeed in slowing it. Saladin's voice bellows above the gunline.

"Now, Siegfried!" A Vanguard vulture-class battle carrier shrieks through the sky above, just long enough for a lone Guardian to drop from the clouds, a meteor wreathed in lightning, bringing down havoc from the skies.

The Price of a Double-Sided Coin